Since the time the all-program draw was resumed on July 6, this is the eighth consecutive time IRCC is conducting draws for the express entry candidates. The draw took place on the 12th of October, 2022.

The invitations were given to 4250 candidates whose score was 500 minimum; the candidates from three different programs were all invited, those Canadian programs include the (CEC) Canadian Experience Class, (FSWP) Federal skilled worker Program, and (FSTP) Federal Skilled Trades Program.

These draws were paused for about 18 months since December 2020 and in this pause phase, only candidates from CEC and PNP were allowed to have invitations to apply for permanent residence. This major pause was due to the backlog of applications that were raised during the pandemic (Covid -19) restrictions imposed on travelling. But sooner in September 2021, the draws for CEC were also paused.

Highlights of the Draw

November 1, the Fixed Date for the Announcement of the New Immigration Levels Plan

The 2022-2024 Immigration levels plan targets about 4,32,000 permanent residents. Each year IRCC revises the target of immigrants to be taken as a whole in the next 3 years and then splits them according to their immigration class and programs. For the year 2022, the planned count is 55,900 immigrants through express entry. As per the target now it has invited 28,000 new immigrants in the period between January to August 31st.

Physicians are Now Able to Apply for Express Entry

This was because Canada follows the fee-for-service model, which is totally different from the employer-employee relationship. Technically speaking physicians are so-called to be self-employed. But Express entry does not take into count the self-employed work experience gained within the Country.

But it doesn’t mean that a candidate who is self-employed is wholly ineligible for express entry application, rather he would have gained one year of work experience abroad or as an employee in Canada. In this case, they are still eligible for the express entry program.

The best part about PNP candidates appearing in the EE pool would be already eligible for any one of the programs mentioned above.

EE Express Entry -A point-based system used to rank a profile using the CRS. A well-scoring candidate will receive an ITA and can be eligible to apply for permanent resident status.

On application, the officer from IRCC will review the application and approves it on eligible grounds. After which an applicant would be asked for biometrics and then he may request for submission of additional documents (if necessary). On getting the final approval the applicant will be a permanent resident of Canada. 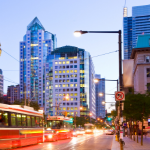