The new Ontario PNP draw has invited Candidates under the Human Capital Priorities stream where the applicants were having their profile in the express entry with a CRS score between 455 and 600.

On February 22, the draw concluded by inviting 773 Candidates for Provincial nomination, this draw focused on applicants who were all working into specifically targeted occupations.

In a normal case, the express entry stream awards a maximum of 600 points to the candidates, till the previous draw candidates scoring above the CRS was not eligible to apply for provincial nomination.

Now, the invited candidates should submit their application for Ontario’s PNP within 45 calendar days

The candidates should possess a minimum of 1 year of work experience in the below listed targeted occupations mentioned with NOC code:

The highlighting factual note is that Canada has conducted draws only for PNP candidates since September 2021 than any other.

There is no confirmed date scheduled or planned for draws like Canadian Experience class, federal skilled worker program (FSWP) said Immigration Minister Sean Fraser, but the business leaders were informed that it would be resumed in the near future.

Now, a call back for high scoring Ontario candidates

Having said that, only PNP candidates were invited in all of the 2021 draws, the express entry candidates in Ontario were not invited to apply for nomination if their scores were more than 467, the scenario made candidates reduce their CRS scores to avail Provincial nomination from Ontario.

The multi-year 2022-2024 immigration levels plan from the immigration department foresees to bring in 83,500 immigrants via both PNP and Express entry aligned categories. Factual note, the targets are higher than the last levels plan as projected by the Canadian Government as 81,500 and 83,000 PNP immigrants for 2022 and 2023 respectively.

This draw is considered to be the year’s biggest Human capital priorities stream draw which has the largest scale of express entry scores that are checked out to be eligible. 145 is the difference of score between the minimum and maximum of 455 and 600. The draw held on January 27 happened to be Ontario’s biggest ultimate call where the province invited 1032 Federal skilled trades stream candidates- another category in the express entry stream.

The Benefit of PNP Nomination

The Canadian provinces are allowed to invite candidates matching the requirements to fill the gap in the labor markets of their region. The provincial nomination solidly attracts 600 points in the express entry’s Comprehensive ranking system. The boosted up CRS score increases the chances of receiving the invitation to apply for permanent residency. 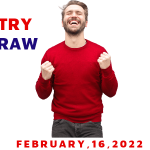 A New Record – On February 16, in the Latest Express Entry Draws, Canada has Invited 1082 PNP Candidates 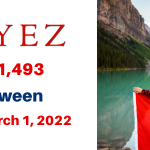