To apply for Canadian Immigration, 1070 express entry candidates were invited by Canada on February 2.

IRCC invited only the Provincial Nominee Program (PNP) candidates. 674 was the minimum score requirement under the Comprehensive Ranking System (CRS).

PNP nomination is so advantageous that it automatically attracts a big total of 600 points which will be added to their CRS score, this is the reason why PNP score carries high importance than the normal draw. Keeping away the nomination score, a below par scoring candidate would have needed a bare minimum of 74 points under CRS.

This new draw (PNP – only) is beating out the previous draw on January 19 where only 1036 candidates were invited.

The candidates, who were invited, can now apply for permanent residence within 60 days.

Canada is holding the PNP draws for a short time. The immigration minister Sean Fraser while announcing the improving measures in the immigration system, did not mention about resuming the draws for express entry candidates for programs such as Canadian Experience class , Federal skilled trades program (FSTP), Federal skilled Workers Program (FSWP).But he added the hold is tentative.

Express entry invitations mostly knocked the doors of FSWP candidates’ pre pandemic. In 2021, more number of CEC candidates was invited by Canada than other programs till it decided to end the draw in September.

Now, the pandemic closure and the IRCC’S transition strategy of temporary residents to permanent residents brought in a lot of piled up cases where there are 1.8 million people waiting for the decision of Immigration authorities. Out of the above about 1, 19,000 individuals were Express Entry Candidates.

Suggestions from the briefing notes of IRCC states that Canada will hold the draw of express entry for FSWP and CEC candidates till it processes the piled up and backlogged applications. The department of Immigration wants to resume back the estimated processing time to the usual standard of six months. Even though IRCC website still suggest the processing time to be 6 months, a memo stated that FSWP candidates are dealing with a waiting time of 20 months, and the CEC candidates for about 8 months. Fraser claimed to fix such inaccuracies in the IRCC website in the upcoming months.

Meanwhile for the express entry candidates in Canada who are either at the verge to leave their jobs or to leave Canada, Fraser added, Canada is looking forward to retain the workers but then has not come up with a fixing solution.

Fraser explained, in response to labor needs IRCC plans to explore the possibility to hold “Occupation focused” [Express entry draws], the budget 2021 of Canadian Government also stated the possibility to bring betterments in Express Entry to pick candidates who would be able to suffice and meet the Canada’s labor market needs.

The mandate letter call of Fraser invokes to develop pathways for temporary workers and students to immigrate to Canada through the Express entry system.

The memo for the month of November stated that Express Entry could be cut into half for the 2022-2024 multiyear immigration levels plan. Fraser did not confess the reporters on reducing the express entry targets for the current year without presenting the level plans in the parliament; anyhow Fraser will open up the new levels plan in February before the next express entry draw.

The timeless and efficient way to get a Canadian PR is via Express Entry, a point based immigration program that manages applications for the key Canadian Immigration Programs such as Canadian Experience Class, the federal Skilled Worker Program and the Federal Skilled Trades Program regulated by Canadian Government where an applicant can submit his profile through an online portal.

The Comprehensive ranking system CRS is used as a ranking tool to analyze a candidate’s profile and award points accordingly. The top scoring candidate will receive an ITA (Invitations to apply) for permanent residence. Once the application is reviewed by an IRCC officer the applicant will be asked for biometrics and also schedule an interview to proceed further. Thereafter on approving the application the applicant will receive a confirmation known as COPR (Confirmation of permanent residence) from IRCC, on receiving COPR an immigrant can complete the landing process by taking in the pre-arrival services to settle in the new land – Canada.

An ideal example of who was invited in the new express entry draw?

John who was 39 years old, was having a bachelor degree and has been working as a construction manager for about 6 years, He excelled in the advanced English language with good proficiency but has never worked or studied in Canada. He was able to enter the express entry pool with a CRS score of 386. He then received a provincial nomination through Alberta’s Express entry stream. The new score of 986 is more than enough to receive an ITA under the new express entry draw. 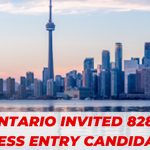