The number of candidates applying for a Canadian Express Entry visa has increased significantly. It includes many candidates from the FSWP (Federal Skilled Worker Program) and the CEC (Canadian Experience Class) categories.

IRCC (Immigration, Refugees and Citizenship Canada), the official immigration body in Canada, has shared a breakdown of the candidates across categories, updated on Jan 4th, 2022. In this, FSWP candidates make up 80% of the entire pool. These statistics came one day before the first draw of the Canada Express Entry visa for 2022.

Table of Content show
1 Candidate Breakup in the Canadian Express Entry Pool (updated Jan 4th, 2022) by the Immigration Category:
1.1 ALSO READ: CANADA TO ANNOUNCE IMMIGRATION LEVELS PLAN FOR 2022-2024
2 Things to Look Out for in 2022:

While inviting PR (permanent residence) applications candidates, IRCC has left out the FSWP candidates since their last draw that included all programs back in December 2020. As a result, almost 80% of candidates for the Express Entry visa category belong to the FSWP category. In 2019, before the global pandemic struck, FSWP candidates got nearly 45% of all draw invitations. In March 2020, after the COVID-19 pandemic hit, only the PNP and CEC candidates were invited for the next couple of months. Following that, IRCC returned to the all-program draw format that summer.

However, the Canadian Government invited only the PNP and CEC category candidates. The reason for this went beyond preferences. The Government of Canada has set a target of welcoming 401,000 new immigrants into Canada in 2021. The Federal Government’s strategy focused on just candidates already based in Canada to meet this goal. The majority of candidates in the CRC category reside in Canada. For the first half of 2021, the travel restrictions imposed by Canada barred non-exempt PRs (permanent residents) approved outside Canada from entering the country after March 2020. Inviting more overseas candidates would mean more immigrants would get stuck in limbo, and the Government would fail to meet its immigration targets for 2021.

Even after lifting the restrictions, the draws for PNP and CRC candidates continued. By September, IRCC restricted the CEC candidate draws and invited only PNP candidates once every two weeks.

Within six months, the candidate pool for both FSWP and CEC categories has grown. The decrease in FSTP candidates can be accredited to several factors. IRCC maintains an invitation hierarchy for its candidates within the pool eligible for multiple visa programs. CEC is on top of this hierarchy, followed by FSWP and FSTP, respectively.

If a candidate is eligible for CEC and FSTP, IRCC invites them to first apply as a CEC applicant. FSTP candidates can also get a provincial nomination and enter the PNP category.

Additionally, Express Entry Canada visa processing time profiles have a one-year validity period in the candidate pool. If a candidate is not invited within that period, they are not considered within that pool again. Express Entry applicants can resubmit their applications if they wish to try again. Since there were no FSWP or FSTP draws in 2021, it is likely that several candidates’ profiles expired.

A PNP candidate is generally guaranteed an invitation to apply as their nomination receives a 600-point award. IRCC has held several draws specifically for PNP candidates through the pandemic, even though they weren’t always in Canada. The PNP category was designed by territories looking to aid their immigration goals, but the Government still gets the last word on who becomes a PR. For this reason, the nominating territories and provinces need these PNP candidates to be invited by the Canadian Government so that their regional population growth and economic targets can be achieved.

In 2022, Canada is expected to increase its targets for immigration levels. According to the Immigration Levels Plans 2021-2023, Canada aimed to admit 411,000 new immigrants in 2022. Sean Fraser, the Immigration Minister of Canada, is preparing to announce the new immigration targets for Canada by Feb 14th, 2022. When Fraser had previously announced that by 2022 the Atlantic Immigration Pilot would turn into a permanent program, he said Canada would return to the process of admitting a mixed bag of immigrants both in Canada and abroad.

In an internal memo published in September 2021, IRCC announced that it wanted to reduce its backlog of Express Entry applications to half to meet the six-month processing standard before it resumed draws for non-PNP categories. By December 2021, the backlog had come down to nearly 119,000 people awaiting a decision compared to 138,000 applicants in October.

This decline was motivated by the CEC category applications that reduced to 25,000 in December from over 48,000 in October. The backlog of Canada’s skilled worker visa applications increased to nearly 55,000 by December, compared to the 51,000 applications in October.

Senior officials of IRCC met with senior civil servants towards the end of 2021 to discuss their Express Entry candidate intake strategy for 2022. This information and their decision are set to become public shortly. This information will affect.

Contact our experts to see how these changes impact your application, including the plans to move to Canada. 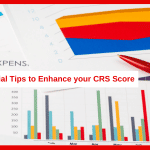