What is an LMIA (Labour Market Impact Assessment)?

Before recruiting foreign labour, firms have to obtain government approval. This approval is Labour Market Impact Assessment (LMIA), formerly known as a Labour Market Opinion (LMO). When a Canadian company cannot fill a position with a local Canadian worker, LMIA is granted. The most common way to demonstrate this is to post job openings in Canada and make an effort to recruit Canadians, indicating that the company is unable to fill the position with a Canadian citizen.

An LMIA process is a labour market verification procedure in which Employment and Social Development Canada, also known as the ESDC, evaluates a job offer to ensure that hiring a foreign worker will not negatively impact the Canadian workforce. Employers will be obliged to give various information regarding the job they wish to hire a foreign worker. These include the number of Canadians who applied and the number of Canadians who underwent the interview process, including a thorough explanation for why the considered Canadian workers were not hired.

After applying for the LMIA, the employer must wait for Employment and Social Development Canada approval. This document is known as a positive LMIA, often known as a “confirmation letter,” and it affirms the requirement to hire a foreign worker on a visa Canada work permit.

ESDC will consider the following elements in their analysis of the job offer:

Also Read: How Long Can I Stay In Canada As A Visitor?

In general, the more specialised the position and the higher the compensation provided, the better the odds of receiving a good LMIA for jobs in one of Canada’s main cities. This is still true in less populous cities and regions, but obtaining an LMIA may be easier in general.

Both streams have two more sub-streams:

Work Permits Based on the LMIA:

To obtain a Canadian work visa, overseas workers and employers often must go through a two-step process. The candidate must first apply for a Labour Market Impact Assessment through ESDC, then apply for a work visa through Citizenship and Immigration Canada (CIC).

The LMIA is granted by ESDC, which enables a Canadian business to hire a foreign worker after examining a number of protective labour market conditions. Visa Canada work permit for foreign employees who require an LMIA will only be granted for a year in all low-wage occupations, according to a June 2014 announcement.

How long does a Labour Market Impact Assessment take to complete?

For certain LMIA applications, ESDC has committed to a 10-day service standard. Only applications for employment in high demand (such as skilled trades), jobs offering pay in the top 10% of wages earned by Canadians in that province or territory, and jobs with a short duration work period will be processed in 10 days (less than 120 days).

ESDC offices process LMIA applications, and ESDC offices can be found in every Canadian province.

As of June 2014, all companies seeking to hire a temporary foreign worker in Canada must pay a $1,000 CDN processing fee for each request for a labour market evaluation. A $100 CDN “permission charge” is also required.

Unless the business can prove that another language is required, English and French must be the only languages that can be identified as work needs in both LMIAs and job vacancy adverts.

Employers must also publicise all job openings in the Canadian job market for at least four weeks before applying for an LMIA. They must show that they employed at least two different recruitment strategies in addition to posting an ad on the Canadian Job Bank website. Employers must concentrate their advertising efforts on under-represented groups of Canadians, such as Aboriginals and those with impairments.

Employers who apply for LMIA for high-wage positions must also submit a transition plan to ESDC along with their application. The company’s transition strategy should detail how it intends to lessen its reliance on temporary foreign labour. Employers might demonstrate their intent to lessen their reliance on temporary foreign labour by investing in skills training or employing Canadian apprentices.

The transition plan might also include proof that the company is aiding its high-skilled temporary foreign worker in becoming a permanent resident of Canada. If the employer is selected for an inspection or if they request to renew their LMIA, they will be asked to report on their transition plan’s progress.

Employers must certify that they are aware that laying off or reducing the hours of Canadian workers is illegal if they hire foreign workers.

Employers should be aware of a number of factors that influence whether or not ESDC will process an LMIA application. Currently, an employer’s LMIA application will not be processed if it fits all of the following criteria:

LMIA processing durations might range from a few weeks to many months. Employment and Social Development Canada (ESDC) will process an LMIA application within ten business days. The following categories now have an expected turnaround time of 10 business days:

An LMIA is a form of verification designed to temporarily protect Canada’s domestic job marketplace and guard foreign workers employed in Canada. Only under select circumstances can an LMIA-exempt visa Canada work permit be obtained. 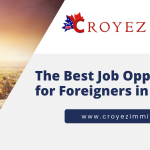